Vogue during the war

During this period of time, where fashion was changing constantly and so much was going on socially, Vogue was there to talk about it, and with vogue we can today see how the rich parisian women saw the war.
Here are some of the most clear examples of how vogue was influenced by war. 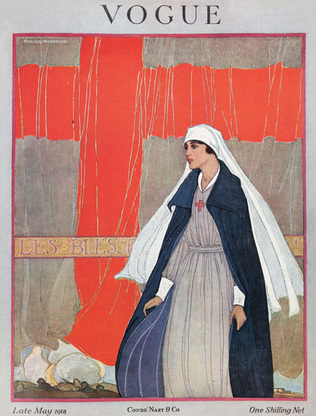 the fear, sadness and anger of the fact that a war had started are represented in this cover, with the red cross, and in the back you can read the words "Les Blessed". This cover also has a religious point of view. 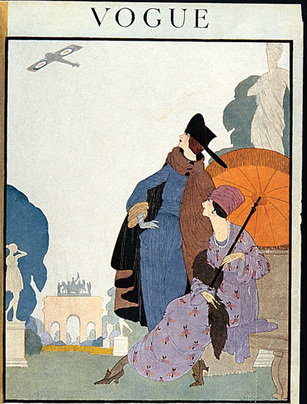 This is the cover of Vogue when the Allies won the war, and this is a comment about it:
"With the enemy thirty miles from Paris, with long-range guns booming and shells bursting, with shattered window-panes and streets littered with debris, the great couturiers of Paris held their Winter Fashion Openings according to their immemorial custom. As this number of Vogue goes to press the war news continues to thrill and cheer even the most apathetic pessimists - it looks almost as if the bravery of those first new fashions had proved a lure to victory. And why not? Victory is essentially a feminine goddess." 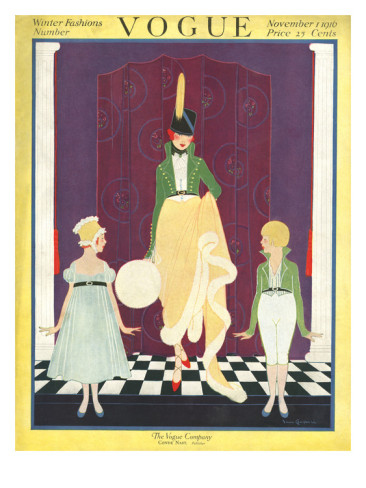 This is the bridal issue of vogue and just in the cover we can see the military influence on the fashion, and this is a comment on the brides during war:
"As almost everyone nowadays is marrying as well as dressing on a war income, the war bride will probably turn first to pages 56 and 57, where the problem is discussed in all its delightful details. Nothing, you see, goes to the head quite so quickly and completely as a prospective wedding, and no single event in life provides so many temptations to extravagance. An adequate trousseau may, and should be, as seductive as you please. No easy matter this as her wedding is the great event in a girls' life, and no less so if she is marrying in haste without an opportunity to shop at leisure. 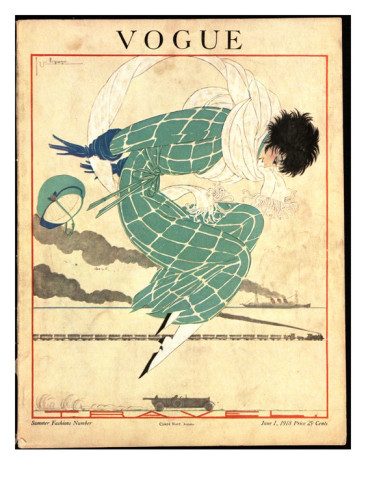 For me this is the clearest example of how war influenced fashion, we can see a women in movement not just only posing, that represent how women became active, she is wearing a green trench coat that is obviously influenced by war and
in the back we can see a train, a war boat and a car and those where the transports that people used to go to war.
Powered by